She lay amongst the pampas grass and wildflowers, quietly watching as the sun slowly began to turn the sky a myriad of colours. It would still be some time before it disappeared behind the mountains, finally filling the evening with inky blackness. Dusk was a good time for thinking. Think until the sun goes down. Pulling a blanket over the problems until the sun could shine light on them once again at dawn.

She sat up, closing her eyes and taking a deep breath of fresh mountain air. She plucked at the grass and small flowers, creating a pile on her lap. When she heard a rustling sound approaching from behind, she didn’t turn around. She didn’t have to. She knew who it was.

“The sun is setting,” he said.

“But not yet set entirely,” she replied.

He stood beside her, admiring her lovely form amongst the flowers and tall grass. He then shared her view of the mountains and the forests. And the sun beyond that.

“What are you thinking about?” he asked.

She threw a blade of grass, watching as the wind whisked it through the air. “Who says I’m thinking?”

He knelt in the field beside her, resting his hands on his thighs. “The beauty of this landscape could turn even the most simple of men into a poet.”

“And what would a simple man say about the view before us?”

There was a fleeting silence before he spoke up.

She turned her head, shocked at his response. “That was… unexpected.”

He scratched the back of his head awkwardly. “It’s not my creation. It’s a haiku by a poet from this region.”

“The words capture this moment perfectly. Whether yours or not.”

“I guess I’m too simple a man to be inspired to write about such beautiful scenery.” His gaze continued to look out wistfully.

“I wouldn’t call you simple.”

“Then what would you call me?”

When no reply came, he met her gaze. He tried to see past the blue eyes, like trying to see through the rippling pond into its hidden depths. And for a moment, he thought he saw a flash – a silver fish darting through the waters – but it was gone before it had even really begun.

“I would call you by your name as usual. Silly.” She brushed the stems and stalks from her lap and smiled at him.

They sat in a comfortable silence admiring the nature surrounding them, and watching the sun slowly set.

As the sky started losing its colour to an inky blue, he stood up.

She looked up at him and he offered his hand, pulling her up. They both took a final glance at the last warm rays of the sun.

She looked over her shoulder towards their small wooden village not far behind them. His village. Although she had been made to feel welcome, they would always see her as an outsider. But not by him.

And she loved him for it. 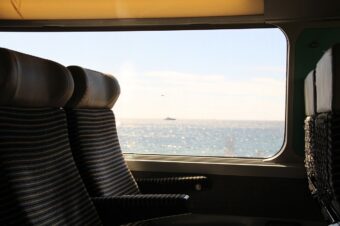 The only time I can truly think is on a train. Read More